These pages are a work in progress and are frequently updated.  We encourage you to bookmark the page and check back often.

On June 18, the Dayton City Commission announced the working structure that will be used to drive changes for police reform in Dayton.

Working groups will address each of five reform areas. Each working group will be co-led by a City Commissioner and a community leader.

Working groups will be made up of community members, the Dayton Police Department, members of the Community Police Council and people with expertise in the criminal justice system. The working groups will be supported by City staff, University of Dayton law students, and Dayton Mediation Center staff.

“Since the protests over George Floyd’s murder began, Daytonians have shown incredible passion and thoughtfulness about rooting out systemic racism in our community and in our police force,” said Mayor Nan Whaley. “We are looking forward to creating the opportunity for Daytonians to work alongside Dayton police to shape policy for the police department that serves them. Policing affects all communities, but with the focus on racism and policing, we are working to ensure that black Daytonians are front and center in this conversation. We appreciate the many community leaders who have already reached out with their interest in doing this work and the commitment the Dayton Police Department has made to engaging as well.”

The City expects most of this process will occur over six to nine months, but some policy changes will likely be enacted much sooner. Work around improving community safety will certainly continue after this intense period work, and the ongoing methods for engagement around reform will be for years to come.

There will be regular report-outs on the working groups, which will be shared publicly on social media and at daytonohio.gov/policereform. 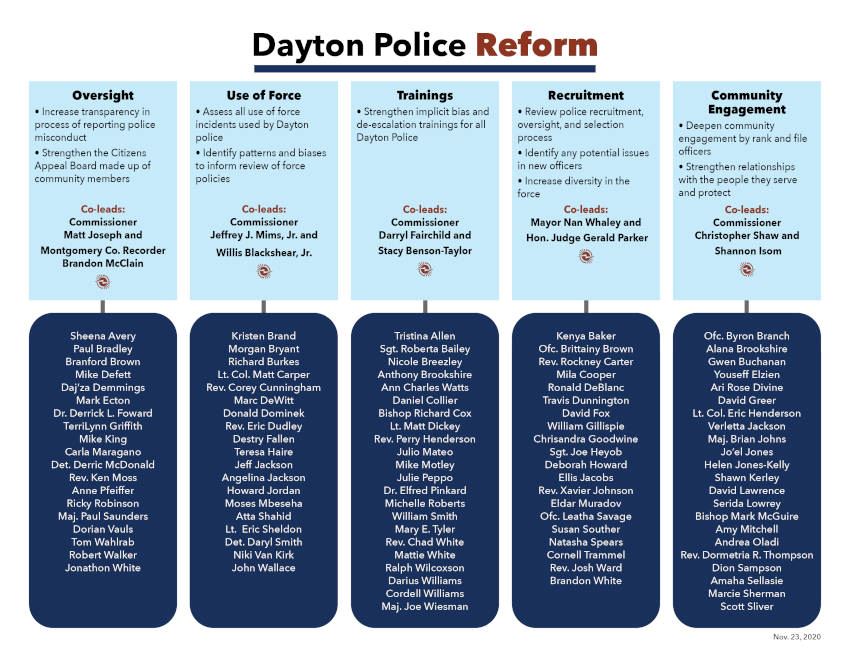