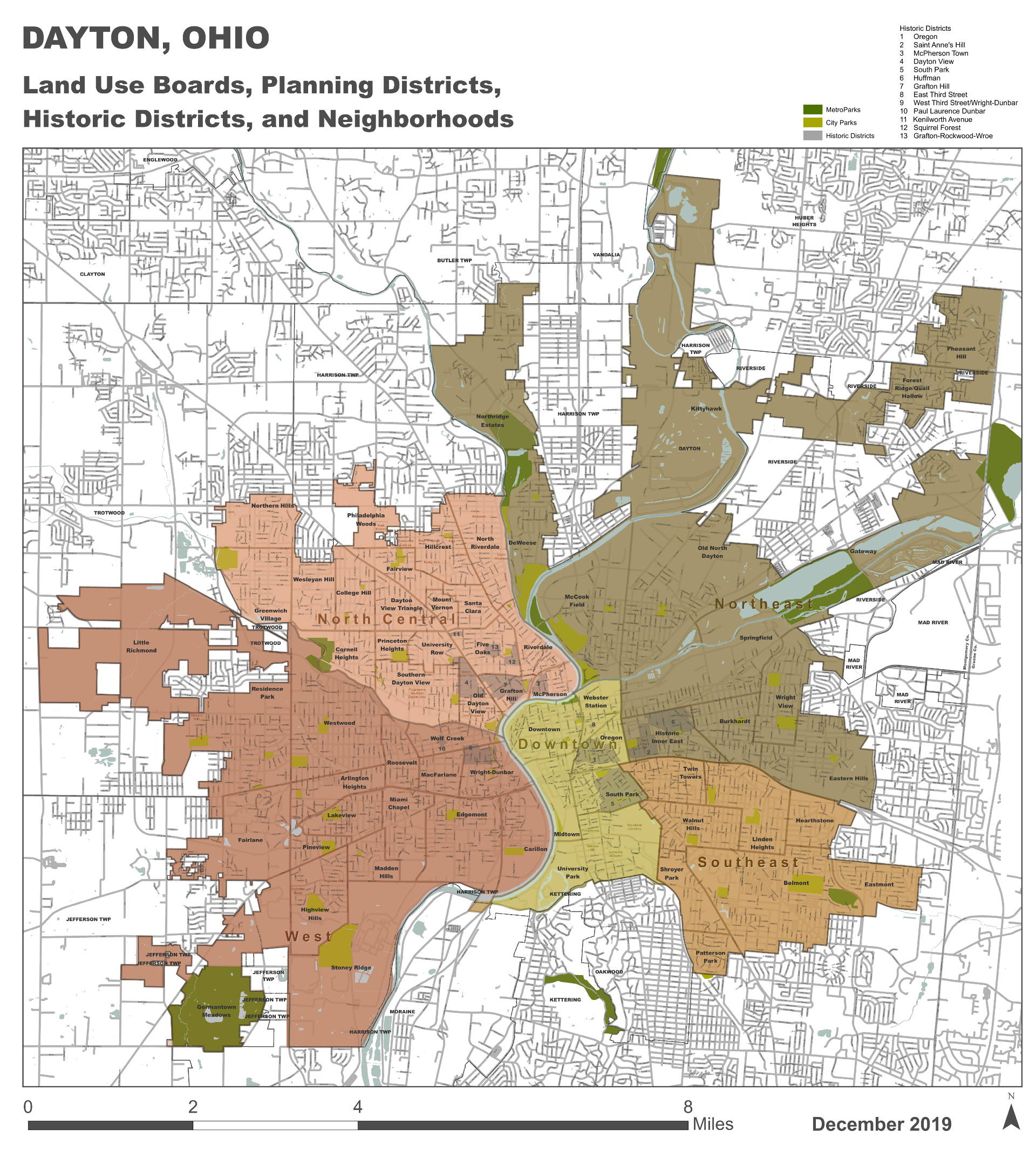 The Safe Routes to School Travel Plan outlined the community’s intentions for enabling students to engage in active transportation (i.e., walking or bicycling) as they travel to and from school. The plan follows the same five E’s as the Dayton 2025 Bicycle Action Plan: Engineering, Education, Enforcement, Encouragement and Evaluation.

The Dayton Riverfront Plan includes an overall framework for the greater downtown area and river corridors as well as conceptual designs to improve ten riverfront parks and connect into the regional paved trail network.

The Dayton Transportation Plan 2040 serves as a guide for the design of transportation projects through utilizing the concept of Complete Streets which are designed to enable safe and convenient access regardless of age, ability, or mode of transportation.

The purpose of this document is to establish a standard in physical design to improve the quality of the visual and functional environment of Dayton's neighborhoods. This document was updated February 22, 2013.

The City of Dayton’s Comprehensive Plan which outlines the key goals and objectives for the city organization. The plan is organized into six focus areas: downtown, youth, education and human services, community development and neighborhoods.

The City of Dayton Livable Streets Policy puts forth a vision, purpose, set of goals, and list of directives to consider when identifying, planning, scoping, and designing all City of Dayton roadway projects, ranging from simple maintenance to comprehensive reconstruction. The Policy additionally, supports other City planning efforts to promote alternative forms of transportation

The City of Dayton’s Roadway Plan contains a compilation of recommendations and needed infrastructure improvements on roadways and thoroughfares in order to maximize the economic development potential of opportunity areas that are either not or under-utilized.

The City’s central planning districts of Downtown, Webster Station, Oregon, Midtown, South Park, and University Park are included in the Downtown Land Use Area. These districts are bordered on the north and west by the Great Miami and Stillwater Rivers and on the south by the corporate city line. Ranging from skyscrapers to dense residential neighborhoods this area has diverse land uses and has seen exciting developments in recent years.

Built on previous plans, the Downtown Streetscape Guidelines & Corridor Plan sets the placemaking vision for downtown Dayton over the next 15 years. The Plan seeks to reimagine, reactivate, and reconnect the street-level of the downtown core to create a robust environment that will catalyze economic activity for decades to come.

The Greater Dayton Plan is a long-term, strategic blueprint for creating a more vibrant, thriving center city by building on the Greater Downtown’s existing assets to enhance it as a regional economic engine

Northwest Dayton Neighborhood Vision is a document that integrates all planning efforts in Northwest Dayton and FROC and sets forward a path toward redevelopment through a place and asset-based investment approach.

The North Main Street Corridor Plan covers North Main Street from I-75 to the City of Dayton’s north corporation line and is meant to serve a strategic document and road map to guide community, decision making and investment properties over the next decade.

The Northeast Land Use Area contains 15 different planning districts and is the largest planning district in the City of Dayton. Northeast is bounded by Miami and Stillwater rivers to the west, Riverside to the east, Huber Heights and Harrison Township to the north, and the Downtown and Southeast Land Use Areas to the south. This area is largely industrial and contains major corridors such as: Keowee and Webster Street, Troy Street, Valley Street, and East Third Street.

The purpose of Northeast Dayton Neighborhood Vision is to integrate all planning efforts in Northeast Dayton, identify gaps in the planning, and provide a singular vision that allows for flexibility and a multitude of redevelopment opportunities.

The Southeast Land Use Area is bounded by US-35 to the north, Riverside and Kettering to the east, Kettering to the south, and Oakwood and Woodland Cemetery to the west. While mostly residential, Southeast Dayton has several large parks and small centers of commercial activity. Major corridors include Wayne Avenue, running from downtown south and east through the center of the geography; Wilmington Avenue and Shroyer Road, connecting Dayton to the suburbs south of the city; Smithville Road, joining Northeast and Southeast Dayton; Xenia Avenue, spanning the length of Twin Towers; Watervliet Avenue, bridging residential and commercial uses in Belmont; and Patterson Road, which intersects several other corridors, creating opportunities for accessible restaurants and retail.

West Land Use area combines the planning districts of Inner West and Southwest. The borders of West Land Use area are Wolf Creek to the north, and the Great Miami River to the east. Adjacent jurisdictions include Harrison Township, Jefferson Township, and Trotwood. US 35 bisects the West running east/west and allows for major north/south corridors like James H. McGee Blvd and Gettysburg Ave to have great vehicular connectivity. West Third Street and Germantown Road are other major thoroughfares running through West Dayton.

The Carillon-Edgemont Neighborhood Plan covers the two planning districts of Carillon and Edgemont and is meant to serve as a guide to create a blueprint for the communities’ future that captures resident’s hope and aspirations and sets the stage for future investment.

The Miami-Chapel Choice Plan aims to rebuilding the fabric of the Greater Miami Chapel neighborhood through the creation of new housing, improved infrastructure, and strengthened social supports.

The Greater West Dayton Corridor Plan provides a guide that integrates the City of Dayton’s asset and place-based economic strategy to impact and improve overall community confidence in the future of the City along major strategic corridors in the West Land Use Area.

West Dayton Neighborhoods Vision is a document that integrates all planning efforts in West Dayton and sets forward a path toward redevelopment through a place and asset-based investment approach. The plan emphasizes the reunification of the northern and southern halves of West Dayton that were bisected by the construction of U.S. 35 and the strengthening of strategic corridors.