Meetings last approximately 2 to 3 hours.
Agendas & Minutes
Agendas are available prior to the meetings. Minutes are available following approval.
View Most Recent Agendas and Minutes

The nine individual seats on the Landmark Commission are specified as follows:
*Preferences are the type of person that the Department of Planning and Community Development would like to see hold the particular seat.  These preference types help to ensure a well-rounded, knowledgeable, and representative decision making body.


The mission of the Landmarks Commission (LMC) is to encourage and promote historic preservation and Historic District revitalization. It is responsible for the oversight and control of all modifications to structures in Historic Districts and to designated landmarks.


The Landmarks Commission has the following powers and duties: 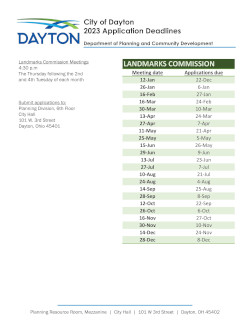