Dr. Ayman Salem came to the United States from Giza, Egypt to further his education. Through his hard work and dedication, he has become a leader in the Material Science and Engineering field. After obtaining his PhD from Drexel University in 2002 and starting a company in 2009, he has demonstrated how commitment can make a difference in a community.

“When I first arrived to the United States, my first destination wasn’t Dayton. I was awarded a research assistantship to Drexel University, in Philadelphia, where I earned my PhD in Material Science and Engineering. During my studies, I was approached at a research conference by a world-renowned titanium scientist and invited to join his research team in Dayton, Ohio.

Many years after being a student and conducting research on aerospace materials, I decided to start my own company. This company is a place where highly skilled scientists are provided with multiple opportunities to investigate aerospace applications.

Throughout my experiences as a student and performing multiple research projects, the many opportunities I received have made me want to provide opportunities for others. I owe a debt of gratitude to many people–my college adviser and titanium mentor, for example–for allowing me to prosper as an individual.

I have been provided the tools and skills not only to make opportunities for others, but to set an example that shows hard work will produce positive outcomes. Being a scientist in the STEM [Science, Technology, Engineering, and Mathematics] field has proven to be very beneficial. ”

The Importance of Setting an Example

“Life is like a rough sea: people will tread water for a long time if there is no lighthouse or North Star; they will tread water. People need an example of what can be done.

I was raised in a middle class family in a third world country. I came to this country without knowing anyone, but with the support of a strong family, though they did not have much money.  Science and engineering education, combined with hard work, has afforded me many opportunities. If you work hard, you can make it. Education provides many opportunities.

I stand as an example for those that do not come from fortunate family backgrounds. I see my life and everything I have done as an example that, through hard work and dedication, much can be accomplished.  This applies for anyone wanting to succeed in America, not only immigrants.”

Giving Back to a City that Has Given So Much

“I was welcomed into this city without any difficulties. The people were hospitable and understanding. When I searched for an apartment, the manager was very accepting and kind. In fact, I signed my lease within one hour of the tour. Dayton is a calm community and people make you feel at home; they are very polite and welcoming. The kindness reminds me of Egypt, with everyone smiling and greeting you.

Dayton became my home because my company could grow here. Dayton is built around Aerospace Technology and is becoming a hub for aerospace companies. The support from The Entrepreneur Center and the Small Business Development Center has cleared many obstacles that faced my business.

Through the company, we have hired a new employee each year. Going forward, we anticipate that growth will increase to enable us to hire three or four people each year. Dayton is a city that is attracting new talent because of the job opportunities, and my company plays a role in this creation of jobs.

I want my employees to enjoy their work and to have fun. I want their work to be considered a hobby, not a job. We are opening a brand new field called “Materials Big Data,” and we hope this will attract even more employees. 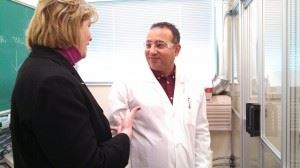 “Not only is Dayton becoming an area for attracting highly talented people, but it is also set up to care for their increasingly diverse families. As a single father, I have needed all the help I can get to raise my teenage daughter, who attends Beavercreek High School. The school’s administrative team has been very helpful and supportive. They have made us feel welcomed and at home. We are very lucky to have them!

Also, the abundance of parks and bike trails has made our weekends joyful with many outdoor activities. For example, Dayton has the oldest and largest military aviation museum in the world [The National Museum of the United States Air Force] and is within a short driving distance to one of the largest and oldest soaring clubs in America [Caesar Creek Soaring Club]. Most significantly, living in the city which witnessed the birth of aviation by the Wright brothers makes you feel proud!”